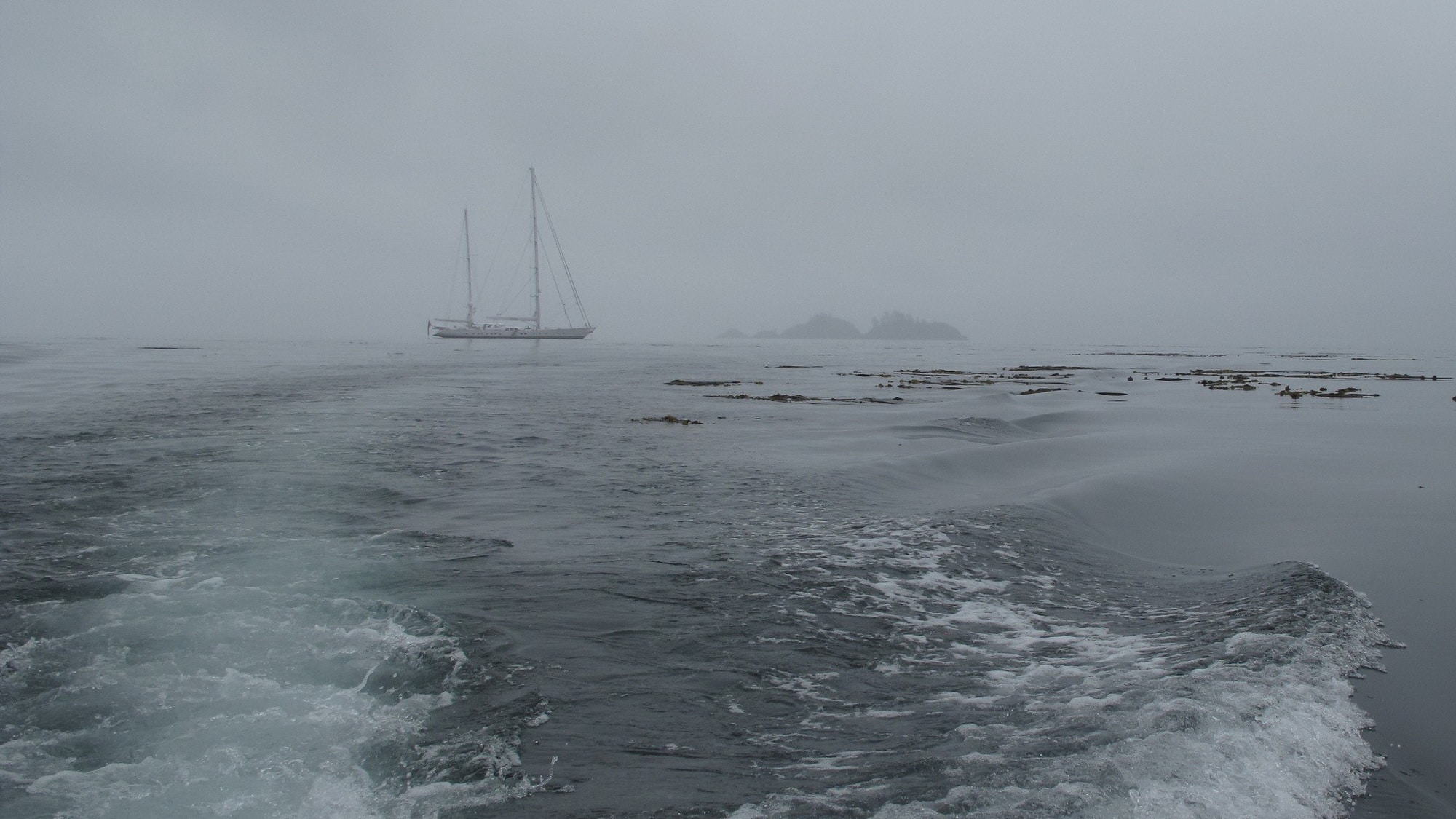 WINTER 2020/2021 – In the past 12 months, several Royal Huisman yachts travelled to Royal Huisman’s facilities in Amsterdam for support and assistance. Various ‘non-Royal Huisman’ yachts have also found a safe haven at the shipyard, taking advantage of the perfect opportunity to look after their yachts and prepare for the fast-approaching post-Covid-season. One of the thoroughbreds currently in Amsterdam is Ethereal, the world’s first hybrid superyacht, which was launched by the shipyard in 2008.

“We are happy to have Ethereal back at the yard for some long-term work. It is so great to be back with the RH Huisfit team, who has such great skills and detailed knowledge of Ethereal and has done such great work helping keep her in tiptop shape since her launch in 2008. The Ethereal crew and I are excited about this chance to be at the yard again— I only wish I could travel and be there, but that’s not allowed from the USA at the moment.”

Ethereal’s captain Peter Grubb tells us all about the upgrade of the yacht’s electrical nerve system, and why Ethereal returned to Royal Huisman to be ready for next summer:

“I’ve been looking forward to coming to Royal Huisman shipyard for Huisfit quite a while now. I was fortunate enough as a young captain to be the master on the racing yacht Matador. She was an innovative design by Germán Frers and originally built by Royal Huisman, as Huaso, in 1983. A cruiser racer, with a removable interior that could be switched from racing to cruising in a cassette way, Matador competed in major maxi regattas around the world. Over time, as the competition became more intense, the need for modifications to reduce weight and increase speed became apparent.  So to lighten the yacht, the beautiful interior was completely removed. When the late Wolter Huisman, while visiting Matador in 1988, saw the stripped shell of the interior he smilingly asked me not to take the boat back to Royal Huisman. He knew the shipwrights at the yard would have had a fit if they saw what had become of their craftsmanship.

I am here now at Royal Huisman Amsterdam for Ethereal. She is a very different animal to Matador. Ethereal is the world’s first hybrid superyacht and it is her first visit to Royal Huisman since she was commissioned in 2009. Since delivery she has sailed to remote areas of the planet, spending many seasons crisscrossing the Pacific and Atlantic Oceans and has many adventures and stories to tell.”

“We arrived at the shipyard in the middle of winter to a warm reception by the Huisfit team. The main works of Ethereal’s in-water-refit are the complete replacement of the programmable logic controller (PLC) systems with the latest technology. The PLCs form the redundant nerve system of the yacht which controls all onboard systems. This requires the yacht to go ‘dead ship’ whereby all of these systems are shut down for several weeks.

Therefore, independent safety systems were installed by the Huisfit team for bilge alarm and fire detection. Alerts for alarms were set up to send via SMS to crew and Huisfit personnel. With no propulsion or winches, the yacht is well positioned with lines and stable mooring poles to keep her secure. Taking advantage of this ‘dead ship’ time and the availability of a specialized team, a long list of additional tasks are taking place in the engine room, technical spaces, interior and on deck.”

“For myself and the crew, working with skilled builders – a number of which were involved in the build of Ethereal – is a wonderful experience. The management is well organized and responsive and of good service.  Our shoreside requirements have been met in a ‘one-stop-shopping fashion’. This has been important to us especially during the COVID pandemic, where all but essential services are closed in Holland.

Ethereal is benefiting greatly from this downtime spent at her makers, and in the good hands of the team  at Huisfit, as we prepare for a summer of cruising and more far flung adventures , if COVID will allow.”

UPDATE JULY 2021  –  Shortly before the re-delivery Ethereal’s Captain Grubb also kindly shared his final conclusions, and told us of his overall experiences with Huisfit’s upgrade “with surgical precision”:

About the quality of the work

“We are happy. A lot of people working on Ethereal know the boat so intimately and the quality of work was high. It has been a good experience. Overall it was a lot of engineering work: all the PLC’s, and there was a list of work the engineers had for some years never really got to work on. So that list is now nearly down to zero, which is great. I feel in a very good place right now.”

About the progress updates and financial reports

“We worked very closely with the project manager and the project controllers, having weekly meetings to follow the budget and the work flow. Of course we added a couple of jobs along the way: some were requested by the Owner and other things were discovered as the work progressed, but a lot less than I thought there would be: a lot of it had been captured originally.

The project controllers here did a really good job of identifying the jobs and putting costings to them. And they were quite accurate when they came out at the end. And we have been able to follow everything. They have a quite sophisticated system where they can project hours and where they are on a certain job: sort of a percentage how far you are into it and how much resources you have got left and how the budget is going. So we were able to monitor that weekly and follow it. There really weren’t any big surprises as we went along. It was really good.”

About Huisfit in Royal Huisman Amsterdam

“It has been great. We were staying in Amsterdam “Noord” [ed: North] in apartments there. Access to the city was great; especially when you had a bicycle. Really easy: you could be downtown in 15 – 20 minutes from the apartments. And also close to the shipyard: I rode my bike every day. We had engineers in the apartments at the shipyard, which was great as they could monitor the boat. It’s been a good experience.”

UPDATE JULY 2021  –  Shortly before the re-delivery Ethereal’s Captain Peter Grubb also kindly shared his final conclusions, and told us of his overall experiences with Huisfit’s upgrade “with surgical precision”:

“…the quality of work was high
…and there was a list of work the engineers had for some years never really got to work on. So that list is now nearly down to zero, which is great.
We worked very closely with the project manager and the project controllers, having weekly meetings to follow the budget and the work flow. There really weren’t any big surprises as we went along. It was really good.”

Pictured above: MATADOR – Royal Huisman’s Frers-designed maxi Huaso was originally a cruiser-racer. She really came into her own as a racing boat when acquired, optimized and campaigned as Matador, placing second in three maxi world championships.

World’s first hybrid superyacht launched (in 2008)
As Royal Huisman innovations tend to be well ahead of the curve, it is easy to see how a 58m / 190ft milestone project named Ethereal might be overlooked just a few years later.

Several years had passed since Royal Huisman launched the ketch-rigged sailing yacht, Ethereal. Noted for her pioneering hybrid propulsion system and incorporating 500kWh of stored energy in her Li-ion battery bank, Ethereal has now logged several hundred thousand nautical miles traversing the world’s oceans propelled either by sail, or by mechanical propulsion, or via her stored energy source. Furthermore, her entire domestic load – in addition to sailing systems and anchoring functions – can source its power from this same set of Li-ion batteries, enabling true stealth mode operation.

Understandably, then, the Royal Huisman team was a little surprised by our Feadship colleagues’ claim to have launched “the world’s first hybrid superyacht”

On board with Bill Joy
The Owner of Ethereal, the world’s first hybrid superyacht, delivered by Royal Huisman in 2009. “A boat is a finite universe and we have to live with our resources,” says the computer software pioneer as he talks fuel cells, decarbonising energy and designing and building his Royal Huisman ketch.

“The late Tom Perkins, an avid sailor, nurtured Joy’s nascent interest in sailing while former US vice president Al Gore […] influenced him to build the most efficient, eco-friendly yacht possible.”

More information about Ethereal and Royal Huisman innovations
An overview of Ethereal can be found in her online brochure by following the links on this website.

Various Royal Huisman innovations can be found on this website at DISCOVER followed by INNOVATIONS.

No better time than now to get your yacht ready!
Could Huisfit be the smart choice for your project, too? Huisfit warmly welcomes all enquiries.